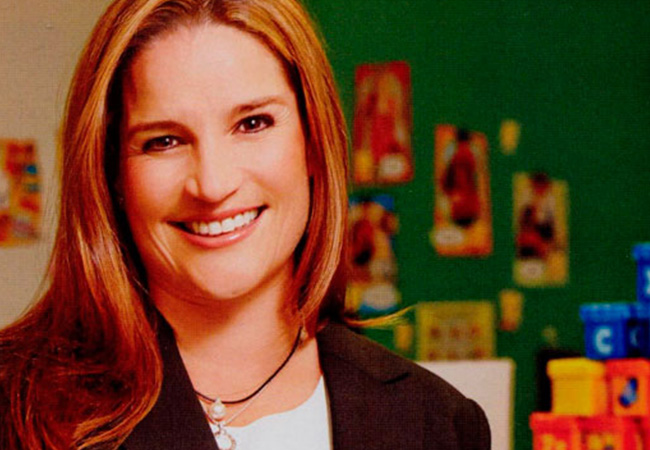 We sat down in little chairs that will soon be populated by very young and intelligent minds. Luciana told me how she is the middle child among 3 sisters, is married and has two young boys. Luciana studied business administration in the University of Lima (Universidad de Lima) in the capital city of Peru. Having a love for designing jewelry, she spent a year studying this in Florence, Italy. She also has a master’s degree from nearby University of Miami, so right away I knew that a Hurricane was in the vicinity.

The idea for Coloring Dreams came after Luciana became a mother. “When you become a mother, you feel the urge to provide everything for your children.

My mom has been an early childhood educator for decades, so I grew up spending after school afternoons and free days in her pre-school (or nido as it’s called in Peru).”

“We want our children to learn, stay healthy and grow up to be successful citizens with good values,” she said. “With the San Ignacio College organization in Peru (which is going to celebrate its 50th anniversary very soon) and their team of educators, doctors, psychologists, and nutritionists, we have created a great curriculum for early childhood education (0-5 years). The curriculum implemented by Coloring Dreams is called Bright Modules.”

The method of Coloring Dreams, as Luciana explained, is based in scientist Jerry Fodor’s Modularity of Mind theory. “As early as 1994, Fodor explained his theory: children are born with separate ‘windows’ in their brain, and depending on the stimulation of these windows in early life so that they can all connect, they will be able to learn and maintain the knowledge. For example, a 4-month old baby looks at his crib’s columns and starts developing the physics module of the brain.” Her own window of the life of an educator has been developed ever since she was in her mother’s belly going to teach.

Her commitment to the Coloring Dreams staff and standard of preparedness is palpable. “As a mother, I see myself in other parents who work hard, sacrificing time with their children. In a world where both parents can study and have a career, it is a risk to leave your child with someone who might not have the tools to nurture them. At many day cares, children play and are taken care of, but they are not necessarily being developed. We hire bilingual educators that have degrees in early childhood education and can follow the Bright Modules curriculum we have in place.”

Luciana also spoke of the nutrition program at Coloring Dreams. “Practicing good nutrition from childhood is a preventative measure for diabetes, high blood pressure and other health problems that come from a bad nutrition. Therefore, we put emphasis on the children to eat well. Coloring Dreams is a place for parents to leave the most precious thing they have in their life, their children, in a place that will stimulate them to grow to be good people in the future.”

Finally, she smiled again as she took the role of interviewer and asked me if I would enroll my children in Coloring Dreams. My answer was easy, “yes.” But I don’t have any children just yet, so you start, dear readers.